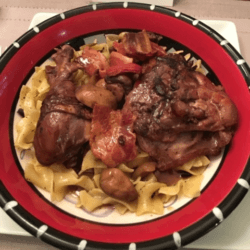 My first taste of Coq Au Vin was at a restaurant called, what else, Le Coq. They closed a few years ago and I wept because it was a favorite. Coq Au Vin is considered a classic example of French cuisine, a favorite of Julia Child and considered one of her signature dishes.

Directly translated the name means rooster with wine, but I have never seen packaged chicken at the grocery labeled by gender. Practically speaking you don’t know which you have, and for that reason a friend scolded me when I announced we were having rooster with wine. Regardless, I refuse to call it poulet au vin.

Craving some coq au vin, I did my due diligence and practiced, and practiced until I ended up with this recipe. It’s far better than what was served at Le Coq and was the main course for my French dinner party.

It’s a three day process but don’t fret. Day one is marinating the chicken and day three is just warming it up. Get ready and go!