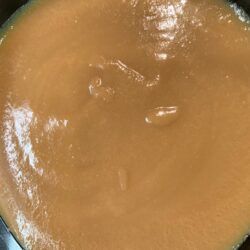 My first taste of dulce de leche was about 15 years ago at an Argentinian restaurant in my home town of Louisville, Kentucky. It was the topping on their wonderful flan.

Dulce de leche can be traced back as far as 1829 and rumor has it Argentina and Uraguay once fought over the right to claim it as their own. Regardless of the veracity in either’s claim, all stories agree on one thing. Like penecillin, plastic, x-rays, chocolate chip cookies and many other great inventions, it was an accident. Someone placed sweetened milk on the stove and forgot about it, returning later to find a thickened, browned delight.

The literal translation from spanish is “candy milk”, which is created by caramelization and the maillard reaction. These two processes are the result of chemical reactions between amino acids and sugars that cause browning and concentrate flavors.

Dulce de leche sauce and caramel sauce are used interchangeably for many recipes, but for my palate the former tastes much sweeter than the latter. This recipe was furnished courtesy of Frank and Federico Elbl, the former owners of Palermo Viejo. 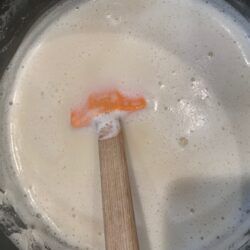 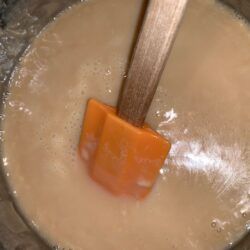 Don’t think you can forget this on the stove and return to a perfect sauce. That’s why they call inventions such as these accidents! Pay attention though and you can have something that tastes just as good.

Thanks to Craig Newman, brother-in-law of Frank and Federico Elbl for sharing their recipe with me.