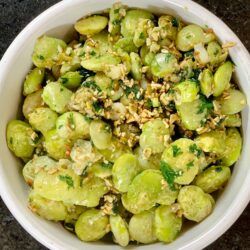 Mayan lima beans were a wake up call for me. A lifetime of canned or frozen and boiled beans had dulled my appreciation for limas. I never ordered them in a restaurant, until I met Bruce Ucan. He is a Mayan indian from the Yucatan Peninsula and he brought his recipes from there to Louisville where I was lucky enough to dine at his restaurant, the Mayan Cafe’.

Named after Lima, the capital of Peru and discovered there 1200 years ago, these beans are a staple of latin american diets. They’re a healthy choice, providing a lot of protein and fiber. This recipe calls for Fordhook beans which are the large ones.

This recipe changed my opinion of lima beans and it’s my favorite, but now I’m willing and eager to try them any other way.  These were part of “An Offal Good Dinner” with beef cheeks and mashed potatoes. 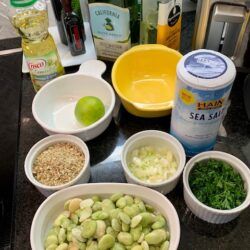 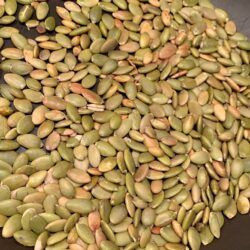 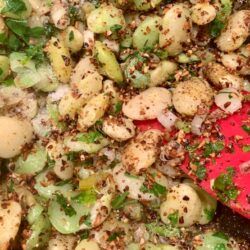 Here is a link to watch Chef Ucan do this. Doesn’t he make this look easy!