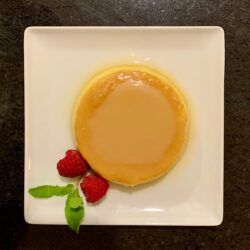 Argentinian flan differs from caramel custard or creme caramel in several ways, with use of sweetened condensed milk and dulce de leche topping instead of caramel.

This recipe from Palermo Viejo restaurant in Louisville, Kentucky is my favorite. They closed in 2015 after a successful 14 year run when the owners Francisco and Federico Elbl decided the long hours took too great a toll on family. When they closed this delicious flan went with them. I tried to duplicate it, but nothing seemed to work, so I tried to contact them directly.

The Search for Argentinian Flan

The internet is a wonderful thing. Bits and pieces remained from their former website and facebook pages. I found tidbits like their recipe for banana crepes, but nothing about their flan or dulce de leche. Then I stumbled across a facebook comment from a man that claimed there was always dulce de leche in their fridge because he was family. His account wasn’t very active but I sent a message anyway, and waited.

A month or so later I was about to give up, when he messaged back. Yes, he was related to the Elbls. Yes, he would ask Frank if he was willing to share the recipes. Again I waited and again thought it was a dead end when I received another message. Yes, he was happy to share his recipe if I would be patient.

Patience is not my strong suit and waiting was torture, but I sat tight. Finally, I received the recipes with a warning that it was for vats of dulce de leche and pans of flan. They had to break it down for small batches. He failed to say the recipe was a couple of tiny, fuzzy photographs unreadable to my naked eye. Panic ensued, but I was able to parse and magnify it until it could be deciphered. Through trial and error I expanded the instructions to include things that as professional cooks they considered unnecessary to write down.

The flan at Palermo Viejo may be gone, but it’s not forgotten.  Thanks to the Elbls, who gave permission to share this recipe. I’m tickled to do so, particularly with dining forum friends in Louisville. This is for you, Robin Garr and the rest of the HotByters. 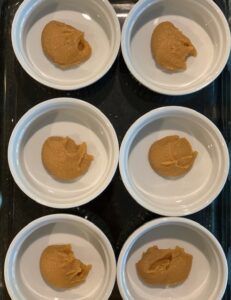 I would be remiss if I didn’t mention that Palermo Viejo’s meats were superb, worthy of all the legendary praise associated with Argentina.

Special thanks to Craig Newman, brother-in-law of Frank and Federico Elbl for getting the recipe and sharing it with me.