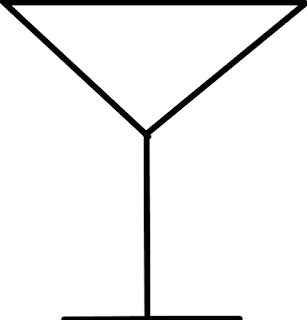 The Martini is arguably the most famous cocktail.  San Francisco claims it’s invention because of a reference in a bartenders manual from 1887. The town of Martinez, California disputes that claiming it was invented there following the 1849 gold rush as a variation of the town’s name. Lawsuits ensued but didn’t settle the question, and neither made a martini with ingredients as we know it today.

This gives rise to a belief it was invented in New York in the 1920’s. By then, the classic recipe of gin and vermouth in a 2:1 ratio, garnished with an olive had become the norm. It’s popularity soared because gin was readily available, even during prohibition.
Many have waxed poetic about the martini. Journalist H. L. Mencken  called it “the only American invention as perfect as the sonnet”.

When prohibition ended and the quality of gin improved, it led to a gradual increase of the gin component to the point that many enjoyed their martini without any vermouth. Winston Churchill is famous for eschewing any vermouth in his cocktail and is oft quoted, or more correctly paraphrased, as instructing whomever was preparing his to “allow the vermouth bottle to remain in the room but just glance at it while pouring the gin generously”. Thus a martini and olive without vermouth became known as the “Churchill”.
Martinis are properly served in a cocktail glass. A glass that has an inverted bowl perched atop a stem is a cocktail glass, but because it is so closely associated with the martini most people mistakenly call them martini glasses. Why the distinction? Because a martini is a martini and a cosmo, appletini or the like is just a cocktail. They usually contain vodka and have little in common with the real thing.

In 1964, the movie Goldfinger was released. In it James Bond famously ordered his martini “shaken, not stirred”, which has become a mantra. It was a departure from the classic cocktail. Shaking a cocktail will do several things. Among them, it will create shards of ice that cannot be strained out, it dramatically increase the aeration and it will contain more water. These differences are important. For one, the extra water  dilutes it. The aeration, important in some cocktails to fully incorporate syrups is unnecessary and results in a dull, cloudy drink. The ice shards then melt, diluting it further.
The clarity of a properly stirred and strained martini is beautiful to behold. The best one is most certainly “stirred, not shaken”. Sorry James.

Notice I said the best martini, not a perfect one. There is such a beast called “perfect martini” and it is made with gin, plus half dry and half sweet vermouth. It’s a martini, but you can be the judge of how perfect it is.

Lastly, we must consider the garnish. If you consider the classic ingredient it is undoubtedly the olive. Ah, but what kind of olive? Spanish? Napa Valley? Stuffed with garlic or blue cheese? How about a lemon twist or a pickled onion?

Ah, ah, ah. That last one was a trick question. A cocktail onion transforms it into a Gibson. Technically no longer a martini.

A word of caution. The choice of olive can start you down a slippery slope. First it’s one olive, then two or more. Rodney Dangerfield joked about substituting olives  for an appetizer. Then comes the temptation of falling into a “dirty martini”. While it still is a martini, and many people love one, the olive brine obliterates the flavor of the classic mixture.

Admiring a classic dry martini, Ernest Hemingway once said “I had never tasted anything so cool and clean. They made me feel civilized”. If it could do that for him, imagine what it can do for you!

And one more thing…

We can’t forget the legendary three martini lunch. Referring to businessmen of means and leisure, flash back to an age of Mad Men, when drinking in the office as well as lunch was quite common. My how the world has changed.  Regardless, after three, anyone should recognize the martini as E. B. White referred to them, “the elixer of quietude”. Yes indeed.