I was taught to fish by my grandparents. Many a time we loaded up the Buick with our cane poles, bobbers and bait to head to fishing ponds on my Aunt’s farm. For an eight year old these trips were marvelous adventures.

Papaw fished for bluegill or catfish, and Mamaw threw out deadlines for turtles. She knew how to catch them and it never took long before there was a steady tug. Then would ensue a war of wills that she never lost and the turtle would end up on the bank. Curious as kids are, I would play with them, offering sticks and such trying to entice them to bite. Of course I was warned that if I were bitten, it wouldn’t let go until it thundered and I, at least in that instance paid attention. I saw for myself how fiercely they bit those sticks, I didn’t want any part of their business end.

I’ll spare you the details of the turtle’s eventual demise and the cleaning and dressing of the meat. It’s not any easier or prettier today than it was then. The difference now is if you are squeamish, you can buy turtle meat with the click of a button.

My grandmother used the meat to make delicious soup. I have no idea what her recipe was and I doubt she actually had one. It just included any vegetables and spices that were available at the time. Since I’m a fan of Creole cooking, I decided to base my recipe on the famous turtle soups of New Orleans and include it for my French Creole dinner.

This one’s in memory of you Mamaw.

Make a day ahead to let flavors meld 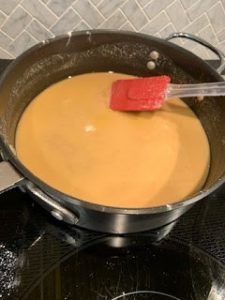 And one more thing…
If you don’t want to fight with a snapping turtle, substitute chuck roast. Who’s going to know the difference?