These are down-home comfort foods we enjoy at our kitchen table, a backyard barbecue or a hunting and fishing camp. They’re woven into our culinary fabric and that’s why I call them Arkansas Originals. 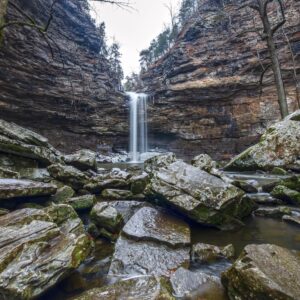 Native American Quapaw hunted on the land and were the earliest settlers. French explorers were close behind and they’re responsible for our state’s name. They called it Ahkan-sea, the phonetic pronunciation of Quapaw in the Illinois tribal language. The large influx of European settlers began in the late 1700’s, and Arkansas became part of the U.S. with the Louisiana Purchase in 1803. As the population grew it became a territory in 1819 and statehood arrived in 1836. Arkansas had a plantation based, agricultural economy until after the civil war.

Centrally located, Arkansas is a melting pot of cuisines with Native American, French, African and Texican influence on the German, Italian, English and Irish immigrants. Cornbread was the only bread until they introduced wheat and is a staple in every family’s cookbook. Peaches were one of the first cultivated fruits along with apples, strawberries and even grapes in the Ozark foothills. 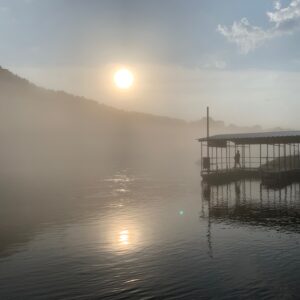 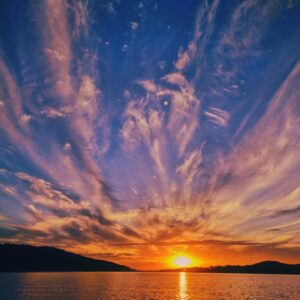 With such a diverse cuisine to choose from, what best represents our culinary traditions? Foods immediately recognized and enjoyed throughout the state are hallmarks of an iconic dish, so they anchor my list.

Unique dishes received special consideration, but not automatic inclusion. There are many one-of-a-kind recipes, but relatively unknown and some that though unique, don’t represent the best of Arkansas cuisine.

My list is arbitrary and the order is random, but the first three and the last are tied to Arkansas in special ways. I hope you like it enough to make and enjoy a few of these. 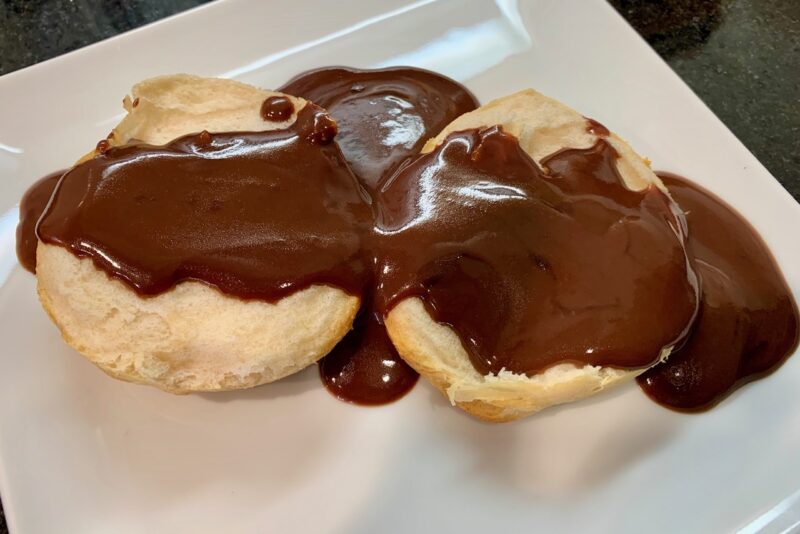 Golfer John Daly told me his mom made the best in the world and that it was his favorite breakfast. It’s powerful testimony that bears a thorough investigation. Chocolate gravy is pretty close to unique in Arkansas and those that love it do so with religious fervor. Read how to make it HERE. 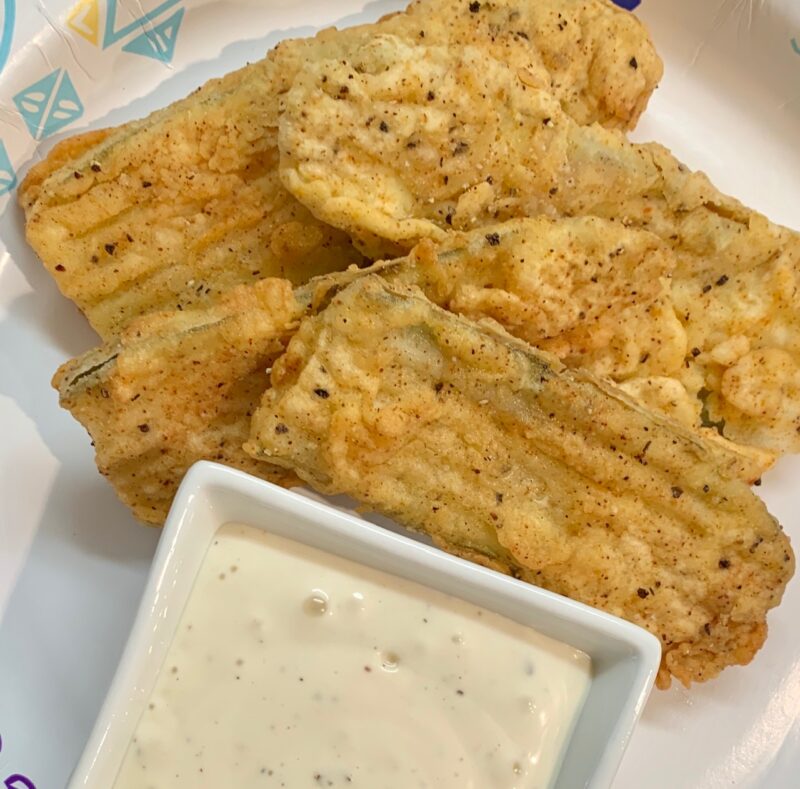 A restaurant perched on the bank of the Arkansas River is where my wife and I first tasted them, but fried dill pickles were invented in Atkins Arkansas. That restaurant is long gone because it was situated too close to the river, but we have enjoyed them many times since, all across the state. They’re easy to make and the breading in MY RECIPE makes them particularly tasty. 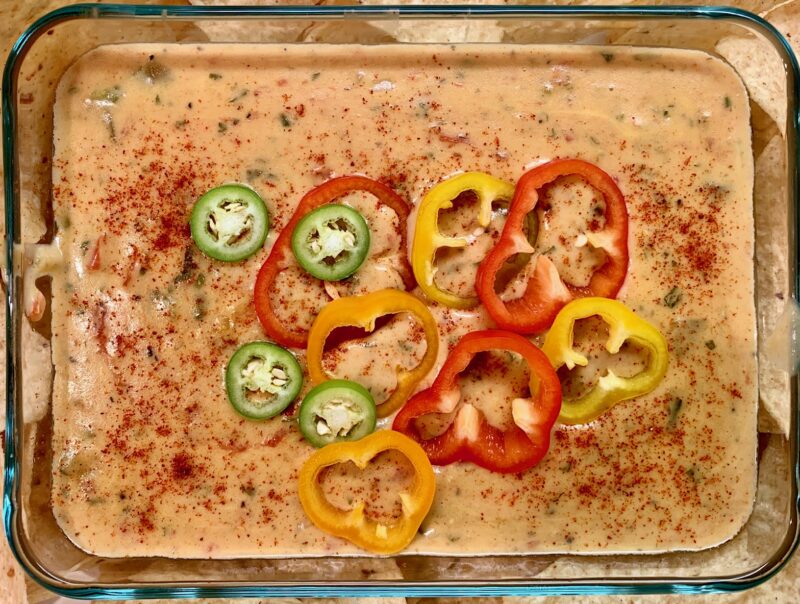 Read the details of the story and get a great recipe HERE. I promise it’s more interesting than an argument between 10 year-olds. 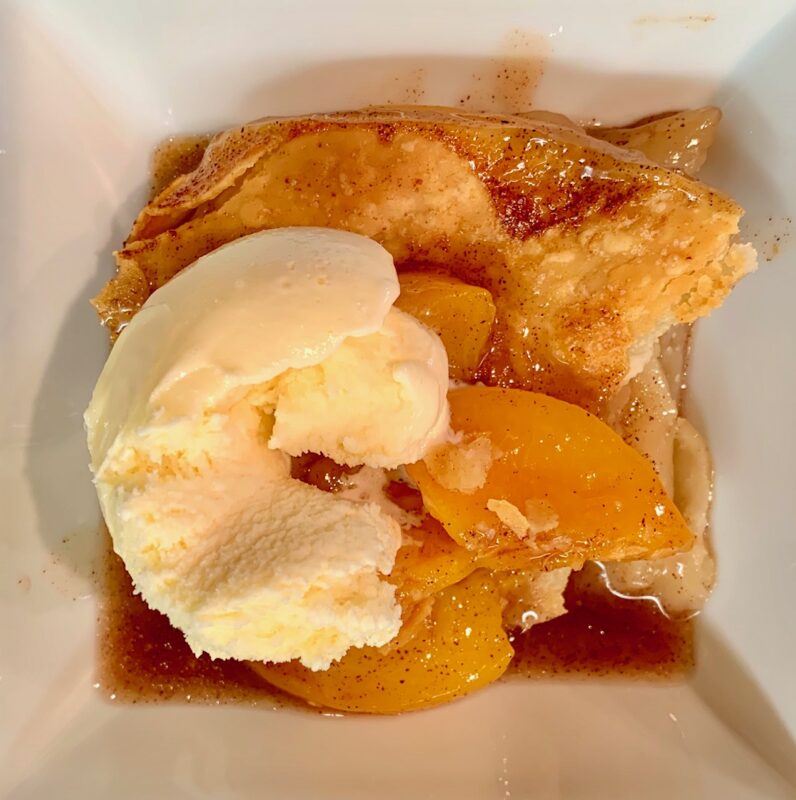 It’s a tough choice to make between peach, blackberry, apple and cherry cobblers, but this is mine, with a big scoop of vanilla ice cream. Arkansas settlers “fixed” dessert in a dutch oven over an open fire, but this double crust is an “elevated” version of the basic recipe. Get the recipe HERE. 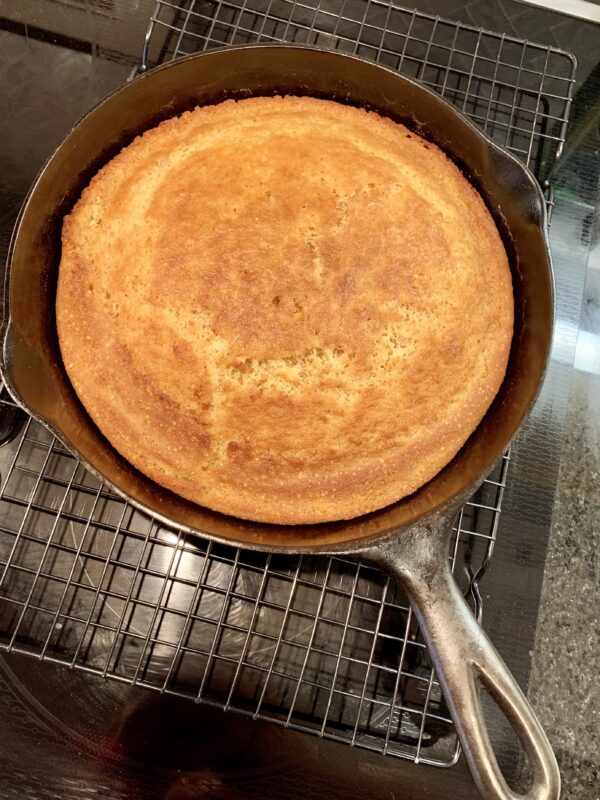 This should be called skillet only-bread, because wheat was introduced here much later than corn. It’s my favorite style of cornbread with a crispy crust and a buttery soft interior. HERE is the link to my favorite recipe. 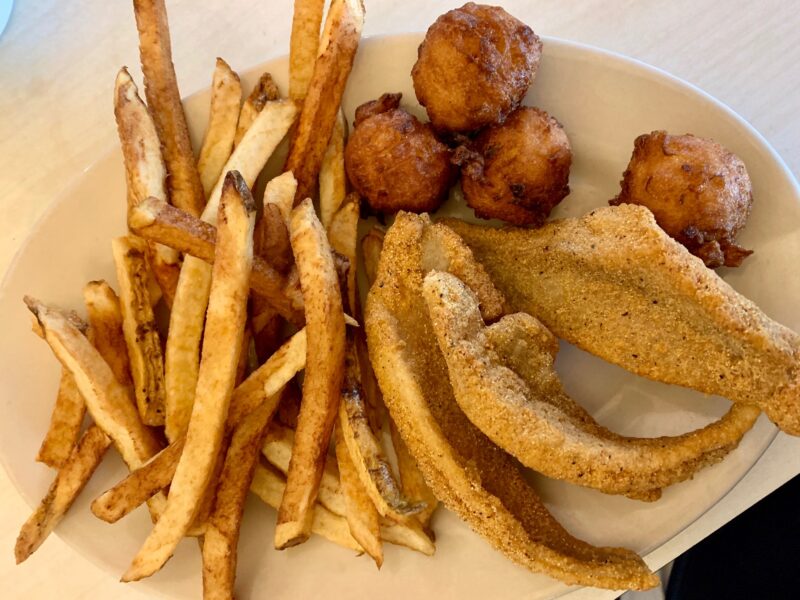 Everyone here loves catfish – except me, but it still belongs on this list. I’ve learned to love many things through acquired taste in my lifetime, but catfish isn’t one of them. When friends ask, I dutifully tag along and watch their delight in a favorite meal. Fried fish and hush-puppies go together hand in glove, so if anyone tries to serve you one without the other, run as fast as you can. I do love hush puppies, so Follow THIS LINK for my hush puppy recipe. 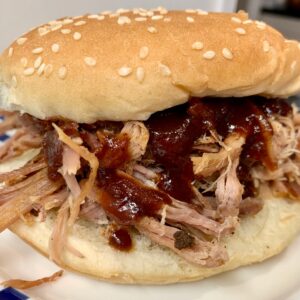 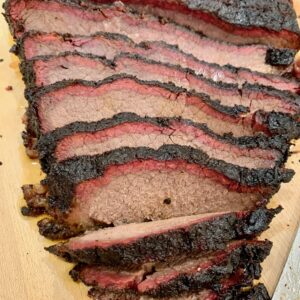 Arkansas doesn’t have its own signature barbecue style, but it belongs here because it’s arguably the single most popular food in the state. Barbecue is the perfect example of the influence of surrounding states on our cuisine. Each region has it’s favorite style that mirrors what’s across the border. Kansas City in the northwest, Texas in the southwest and Memphis in the east each have their followers and Arkansans smoke them all. Follow these links to BRISKET and PULLED PORK for examples of how we do it in western Arkansas. 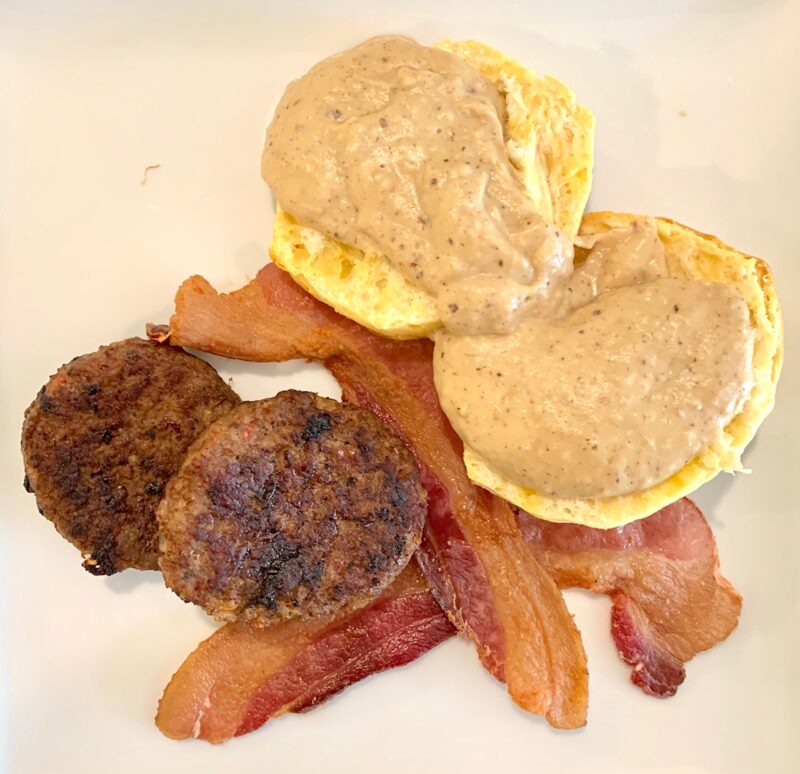 This is the gravy that any home or campfire cook will recognize. The recipe is not unique to Arkansas, but calling it sawmill is. We were all raised on it and it’s still a guilty pleasure. Read my take on gravy and biscuits HERE. 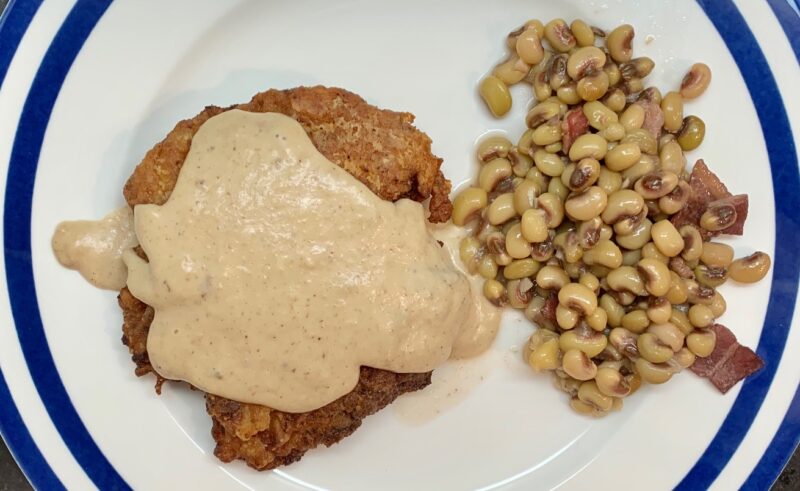 This is a culinary descendant of weiner schnitzel, brought to Arkansas by European immigrants. Here, it is always covered in gravy and has a side of Purplehull Peas or okra. I make it LIKE THIS and you can chew on why it’s named after a chicken, when it’s made from beef. 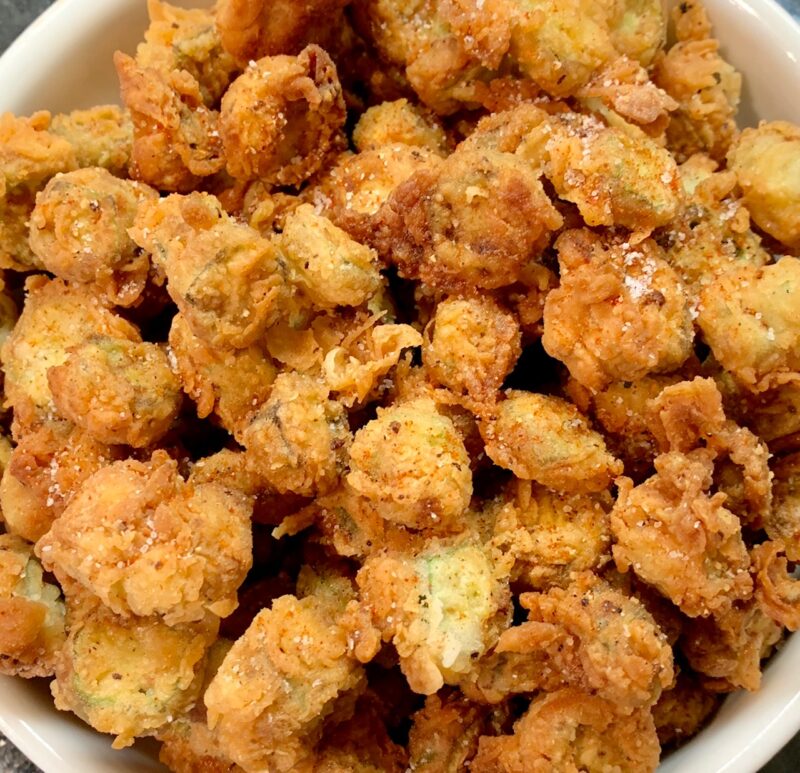 Northerners are not smitten by okra and I can testify that’s true from experience living, working and traveling above the Mason-Dixon Line. On the other hand, Arkansas is crazy about okra. We make it at home and it’s on menus everywhere because it’s our thing. I learned to love okra while living here and for newcomers it might be an acquired taste, but I believe the natives are born with it in their DNA. Deep fry it or fry it in a skillet like THIS. 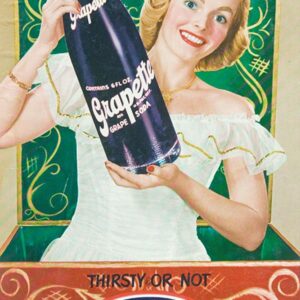 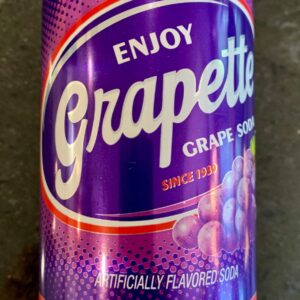 Benjamin Fooks from Camden, Arkansas invented Grapette in 1939. It’s delicious grape flavor, packaged in clear 6 ounce bottles let the color shine through. When Fooks sold the company its popularity faltered and it languished for years until Sam Walton bought the recipe. Unfortunately, it had to be re-branded because the owner wouldn’t sell the name. When Wal-Mart finally secured the naming rights it once again became Grapette. Get it at Wal-Mart.

Credits: Special thanks to Life Around The Bases for the image of Petit Jean Falls, Jayln Bryce for Campfire Cooking and Jeremy Maxwell for Arkansas Sunset.

One Reply to “Arkansas Originals”